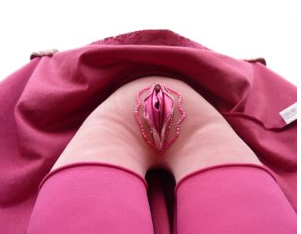 Raising the skirt to display your vagina is a universal gesture of female power and pride used individually and collectively for millennia by women to protect their home, family, sisters, community or way of life, and it’s making a comeback. That’s why I didn’t hesitate when choosing a new title for the 2020 edition of my best-selling book celebrating the beauty and power of the vagina; it had to be Raising the Skirt

Imagine a world where girls and women are told stories fostering a sense of pride and potency in what it means to have a vagina. Stories valuing female genitalia; stories revealing the vagina to be the ultimate symbol of female power. These stories exist: they are ‘raising the skirt’ stories. Everyone with a vagina should know them.

Accounts of how mighty the vagina is – raising the skirt stories – are astonishingly common and long-standing: look at the history, folklore or mythology of any country or culture and you’ll soon find them; they represent a global treasure trove of women’s history. Vaginas, the raising the skirt stories all say, are so powerful that if a woman lifts her skirt to reveal her genitalia she can make a vast array of extraordinary actions happen.

Displaying the vagina in this way gives women the power to control the elements: calming the sea to protect sea-faring spouses, subduing storms, and quieting and dispelling whirlwinds, hailstorms and lightning. Raising the skirt is also an apotropaic act – capable of averting evil: vaginal display scares away attacking bears or lions, exorcises demons and drives out the devil.

In Gaelic and Greek mythology, groups of women raised their skirts en masse to defeat Irish sun god Cúchulain and Greek hero Bellerophon, respectively. Ancient and modern history relate how women deploy the raising the skirt gesture in protest and as a military tactic. In 551 BCE, collective vulval display changed the outcome of war between the forces of Media and Persia; in nineteenth-century China, rows of older women would stand on the top of the city wall and expose their genitals to frighten off enemies.

This is raising the skirt to shock and bring opponents to their senses. It is women saying with one vulval voice: ‘Enough. Think again. Your actions are outrageous and wrong.’ Just over sixty years ago, in 1958, seven thousand women in west Cameroon, Africa raised their skirts in an incredible display of vaginal power to protest against government regulations changing for the worse the way the women farmed their land. The women won.

But the raising the skirt gesture is about far more than women and girls vanquishing attackers and protecting their families and communities from harm, it is about conferring fertility too. Fertility of the people, fertility of the land, fertility of livestock and fertility of crops. In Egypt and Greece, raising the skirt to display the vagina was part of ritual celebrations: enhancing the potency of the Apis bull in Memphis, and promoting fecundity at the Egyptian festival of Bubastis and Greek festivities including the Thesmophoria and the Floralia.

Up until the twentieth century, it was the custom for women in many western countries to go into the fields and raise their skirts to the growing crops, saying: ‘Please grow as high as my genitals are now.’ This tradition stretches back, at least, to ancient Egypt, where raising the skirt was an integral part of religious beliefs. Historian and eye-witness Herodotus (circa 484-425 BCE) gave the gesture a name – ana-suromai or anasyrma – which means, literally, ‘to raise one’s clothes’.

Egyptian, Greek and Japanese mythology all highlight how the act of ana-suromai can be used as a catalyst to break a sombre mood or static state and restore harmony and fertility to the world. Hathor, goddess of joy, love and sexuality exposes her genitalia to her father, sun god Ra, to mollify him and cause the wheels of government to turn again.

When fertility goddess Demeter wanders the earth refusing food and drink as she mourns the loss of her daughter Persephone (who is imprisoned in the underworld after being abducted by Hades), the land loses its energy source, crops shrivel and famine ensues. It’s only when older woman Baubo lifts her gown and points out her naked vagina to the goddess that Demeter finally laughs and accepts sustenance and the world becomes fecund once more. Japan tells a remarkably similar myth of how vaginal display restores fertility to the earth after angered sun goddess Amaterasu-o-mi-Kame has withdrawn from the world.

The wealth of historical and mythological accounts of women raising their skirts are mirrored in the art of ana-suromai. Terracotta statues from Alexandria, Egypt (2-3 CE) depict women standing proud in full-length gowns, heads adorned with decorated and detailed headdresses. Facing forwards, eyes direct, they gracefully raise their fancy frocks to reveal their naked vaginas to all.

Cylinder seals from Syria feature some of the oldest skirt-lifting images (1400 BCE); fast forward across millennia and continents and an eighteenth-century statue of Shinto-Buddhist goddess Kannon raising her skirt is still venerated today. Worshippers come to the Kanshoji temple at Tatebayashi to touch the goddess’ sacred yoni, anoint it with red ochre, and receive her fertile blessing.

The twelfth-century skirt-lifter in Milan, Italy has other aims in mind. Sculpted from stone, she lifts her gown with her left hand and with her right holds a dagger above her pubic mound. This impressive sculpture originally stood above the medieval Porta Tosa gateway – a key entranceway to the city – positioned to protect the city from attack.

Considering the abundance of global ‘raising the skirt’ stories and art, it’s shocking that such accounts of vaginal derring-do aren’t more widely appreciated. A key aim when my book was first published in 2003 was to ensure these histories would not be lost or forgotten.

That’s why one of the things I am most proud of is that ana-suromai or anasyrma – the act of raising the skirt – has entered public consciousness: as a word with its own Wikipedia page, as a gesture celebrated in modern art and as an act of female activism.

Just as women throughout history raised the skirt to vanquish those attacking their home, family, community or way of life, twenty-first century women are now using the age-old action for exactly the same reasons. More on this in a forthcoming blog.

Moreover, as my book Raising the Skirt reveals, the tales of vaginal valour from history and modern day activists are not the only ‘raising the skirt’ tales to tell your daughters, nieces, grand-daughters and friends. Twenty-first century science has its own ‘raising the skirt’ stories; they are equally potent and empowering, and they too reveal the power of the feminine.

The idea of the vagina as a passive vessel, a simple sheath to surround the penis, is one of science’s greatest misconceptions. The vagina, we should shout from the roof tops, is a muscular marvel of engineering – sensitive and strong, fluid and flexible. What science is now revealing is that female genitalia control the most important role of all: the survival of the species.