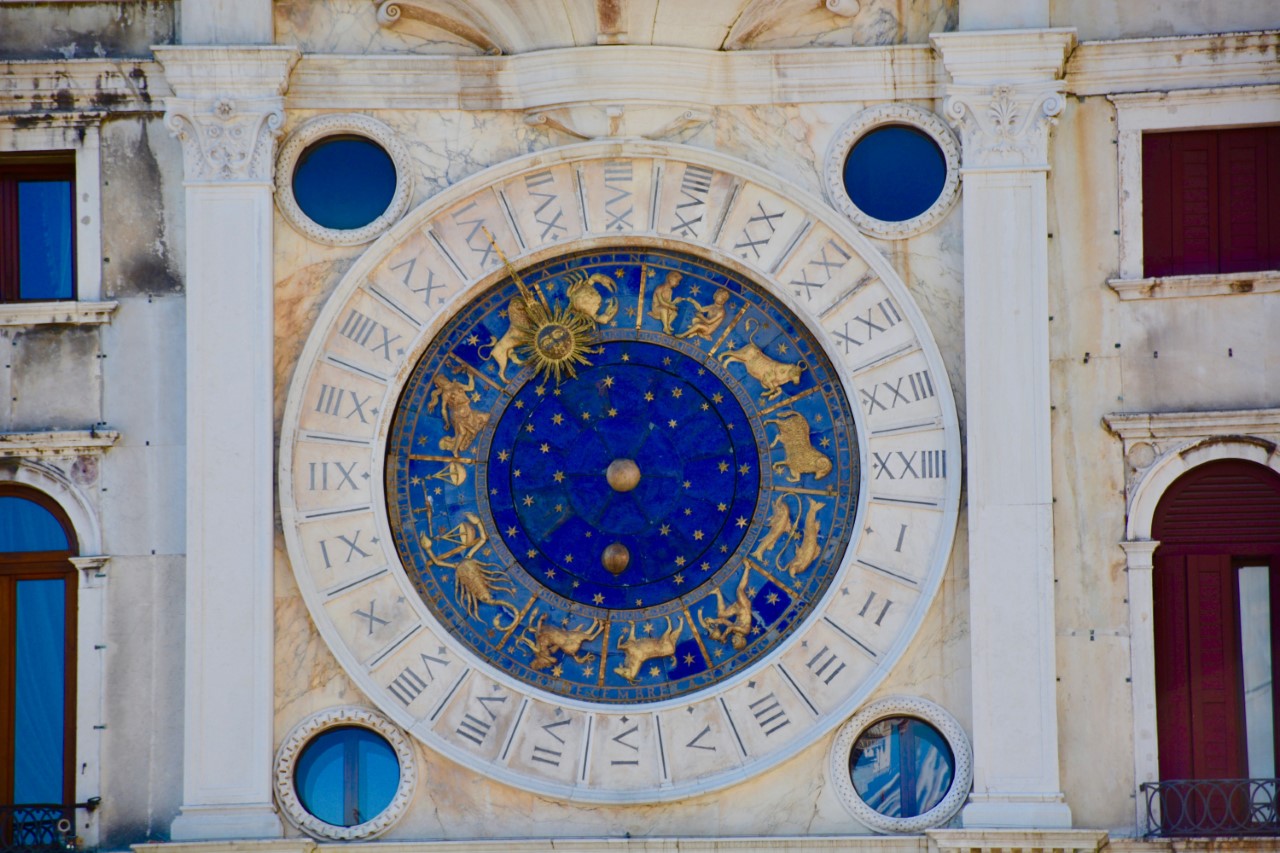 William Lilly considered the flask of urine held out to him. In the light from the lanthorn hanging above the entrance to the Corner House, the thin, swirling liquid gleamed golden-yellow; the face behind it was in shadow. It was early evening in London on the last day of November 1643 and the rising 41-year-old astrologer had been ready to finish work. But here was another case to judge.

Taking the vial, he beckoned the stranger on the doorstep, then turned to note the time from the iron chamber clock on the wall. It was five hours and 53 minutes after noon. Settling his new client, Lilly placed the flask of urine on a sturdy oak table and opened up his casebook again.

The pot of urine in front of Lilly belonged to John Pym, the leader of England’s Parliament and the most influential man in the country after the King. Since November 1640, when Charles I had called Parliament to meet for the first time after eleven years of personal rule, it was the vocal and articulate Pym who had led opposition to the monarch in the House of Commons. It was Pym who drew up the Grand Remonstrance, a provocative document listing Charles’s misdeeds against the country and demanding religious and political reform, which was passed by Parliament at the end of November 1641.

Pym was then one of the five MPs whom an incensed Charles tried and failed to arrest for treason six weeks later. When war became a reality, it was Pym who was the architect of Parliament’s forces: he raised the funds to finance the army by creating a new system of taxation and organized the network of parliamentary committees governing during wartime. When, in mid-1643, military fortune favoured the King’s men, it was Pym who negotiated and concluded an important alliance with Scottish Covenanters in the late autumn. Strengthened in numbers and spirit, Parliament’s reinvigorated forces now had a chance to seize control of the fighting.

But suddenly Pym was worryingly ill: too ill to leave his sickbed. The gentleman at the Corner House was a concerned friend sent by an alarmed Parliament; Pym was not aware his urine was being brought for astrological analysis, the visitor told Lilly, but could he help – would he look into the future and tell him whether John Pym would live or die? Nodding his assent, Lilly got to work.

Lilly was going to use horary astrology (the name means ‘of the hour’) to divine Pym’s prospects. It was the most common astrological technique of the era because, in the hands of a skilled astromancer, it provided clear-cut and detailed answers quickly on any topic, and without the need for an accurate time and place of birth (which many people did not possess). All that was needed for a horary was the time and location the question was posited, or, if it was a medical problem, when the urine was presented.

For health queries, it was the precise moment the sample was received that had the greatest significance (rather than any physical facts about the fluid); this was why men like Lilly were called ‘piss-prophets’. Using his ephemeris (a reference booklet containing tables of planetary positions), and knowing the latitude of his work place in London, 51º, Lilly calculated the position in the zodiac (the invisible path around the Earth along which the Sun, Moon and

He also looked at which sign of the zodiac (which of the twelve equal sections of the zodiac) each planet was in – it could be Aries ♈, Taurus ♉, Gemini ♊, Cancer ♋, Leo ♌, Virgo ♍, Libra ♎, Scorpio ♏, Sagittarius ♐, Capricorn ♑, Aquarius ♒ or Pisces ♓. After, he calculated the astrologically significant points known as the Part of Fortune ⊗ and the North Node ☊ or Dragon’s Head. 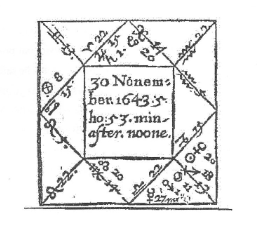 With this information, he could then begin to draw up the figure of heaven (astrological chart) for the moment he had received Pym’s urine. In the 17th century, this two-dimensional representation of the position of the planets was depicted in a square setting (the square horoscope shows Lilly’s chart from his astrological casebooks). Modern astrological charts are typically circular (the circular chart is the modernised version of Lilly’s original chart).

Charts are also subdivided into twelve sections, known as the houses of heaven, and Lilly had to calculate which house each planet occupied (in his square chart the twelve houses are depicted by the triangles around the inner square; in the modern version by truncated slices of a pie).

Each house signifies a particular facet of human life – the second denotes money, the third siblings, the fifth children, the eighth death and the twelfth secret enemies. The first house begins at the middle left of the chart (at a point known as the Ascendant); subsequent houses follow in a counter-clockwise order. It took Lilly about ten minutes to cast the chart. Now he had to judge it using horary’s specific rules. 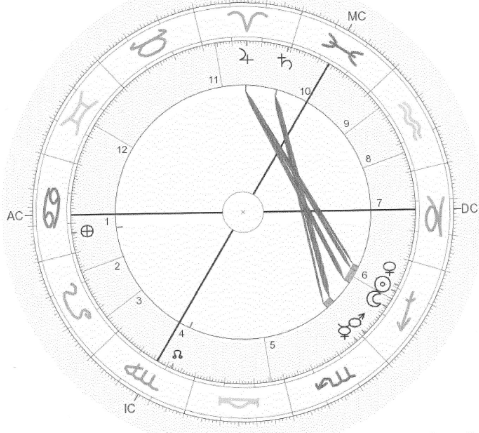 In the ancient star science’s language, the planet ruling the zodiac sign at the start (or cusp) of the first house symbolized Pym. In his horary chart, the sign was Cancer, which meant that the Moon (Cancer’s planetary ruler) was his signifier. The position of the Moon confirmed Pym’s poor state of health straightaway: it was within five degrees of the sixth house, the house of illness.

Knowledge of the nature of the parliamentary leader’s ailment was drawn from the zodiac sign the Moon ruled – Cancer. In astral theory, each sign signified a particular area of the body: Aries ruled the head, Taurus the neck, Gemini the arms and hands, Cancer the breasts and belly, through to Capricorn ruling the knees, Aquarius the ankles, and Pisces the feet.

Lilly then analysed whether the Moon was in any angular relationships (or aspects) with other planets in the chart. There were five possibilities: planets could be in opposition to each other (180° distant from one another), trine (120° distant), sextile (60°), quartile or square (90°), and conjunct or in conjunction with each other (when the planets were adjacent).

Overall, the information led him to pinpoint Pym’s stomach as the source of the sickness. Ruling out poisoning, he diagnosed digestive problems caused by a stoppage of some kind in the belly. The next step was the prognosis. For this, he looked at the Moon’s movements in recent days and through into the future: with which planets in the chart had the fast-moving Moon come into contact with, or was going to? When would such meetings take place?

The portents were ominous. The day before, the Moon had conjoined in the heavens with the malevolent planet Mars and the malefic fixed star Cor Scorpii (the Scorpion’s Heart or Antares), which was associated with sickness and death. In addition, the Moon was, in the words of the mantic art, combust (moving to conjunction) with the Sun in the house of disease – this signified death.

The last question was when death would occur. Lilly’s forecast was that the parliamentary leader would die in eight days’ time. He assessed this by looking at the Moon’s movements, and at the planet ruling the zodiac sign at the start of the house of death (the eighth house). In Pym’s chart, this sign was Aquarius, which is ruled by Saturn.

By William’s calculations, the length of time left to live came from the number of days it took the Moon to move from its current position in the zodiac sign of Sagittarius to one where it was adjacent to Saturn. Checking in his ephemeris, Lilly noted that the Moon and Saturn would meet on Friday 8 December. This, he told Pym’s friend, was when the great man would die.

Lilly’s was correct: Pym died on 8 December 1643. On dissection, Pym’s physicians found a fist-sized growth in his belly, large enough to be felt from the outside, which had been interfering with his digestion (the tumour may have been cancerous). Lilly’s astral analysis had pinpointed precisely the nature and timing of the parliamentary leader’s illness and death – and crowned Lilly as Parliament’s new piss-prophet. His celestial forecasts and astral propaganda for the Parliamentarians would change the course of the English Civil War.

Read more about how Lilly enthralled the civil war-torn nation and how the Establishment eventually tried to silence him in The Man Who Saw the Future: a biography of William Lilly (Watkins, 2015). https://amzn.to/2r1PVKx

Charts reproduced from The Man Who Saw the Future (Watkins, 2015). Zodiac image by Josh Rangel on Unsplash.