Why the clitoris is crucial – for both women and men 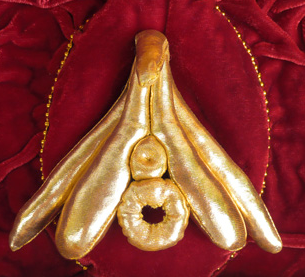 I was thrilled to read reports last month that scientists are now convinced the female clitoris has a role to play in reproduction – as well as its long-acknowledged role in sexual pleasure.

But while I was elated at the news that researchers had spotted clitoral arousal brings about a change in the position of a woman’s cervix, which then gives any sperm present the necessary time to become primed for fertilisation, another part of me was deeply, deeply irritated.

Why has it taken science so long to reach this conclusion? Surely it was obvious the clitoris has a reproductive role and was not a purely-for-pleasure plaything.

Sadly, the answer is that the female clitoris’ power hasn’t been fully appreciated until now because of science’s inherent sexism when it comes to the female body. We are still feeling the effects of Aristotle’s superiority scale which arbitrarily placed man above woman because women had lesser ‘heat’, defined men as active and women passive, and led to Aristotle declaring: ‘For the female is, as it were, a mutilated male’.

The idea of the vagina as a passive vessel is one of the key consequences of Aristotle’s sexist superiority scale. For far too long, science presumed women didn’t have any active role to play in creating offspring. At one point the egg’s genetic contribution was even ignored: men were considered to be the sole driving force; women merely providing the inert incubation apparatus.

Ignoring or denying the female clitoris an active reproductive role until now is simply another example of science’s long-standing sexism. Sadly, once those patriarchal glasses that paint the world as one where men are active and female passive are on, it can be hard to take them off and see the world, and women, as we really are.

I insisted on a reproductive role for the clitoris in the first edition of my book Raising the Skirt: the Unsung Power of the Vagina (which was published in 2003 as The Story of V and is due to be reissued in February 2020). In it, I wrote: ‘the clitoris’ function is two-fold, encompassing sexual pleasure and sexual reproduction, with these two roles inseparable from each other, and crucial – in both sexes.’

I stress ‘in both sexes’ because my understanding of why the female clitoris is crucial for both sexual reproduction and sexual pleasure stems, in part, from appreciating that men have a clitoris too. A quick glance reveals the clitorises of both sexes are remarkably similar: both consist of a crown, a body and legs and both are composed of the same erectile tissue – the corpora cavernosa (see image Fig 4.6 from Raising the Skirt: a comparison of the sexes’ clitorises drawn by Raymond Turvey).

There are some slight differences: a woman’s clitoris has longer legs and a shorter body; a man’s clitoris has a longer body and shorter legs – but both fill with blood and become erect in response to sexual arousal and both perform the same functions in sexual pleasure and reproduction. 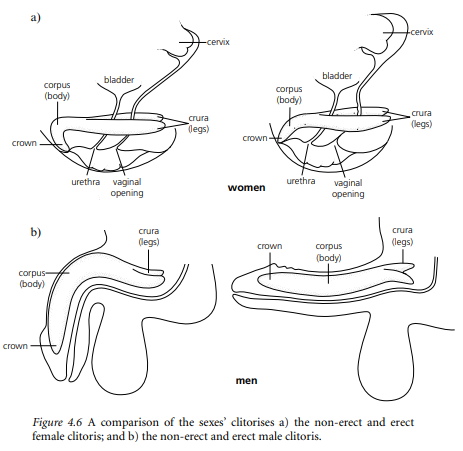 I wrote in 2003: ‘The man’s clitoris runs the length of his penis and without it a man’s penis would never get, and remain, stiff enough to gain safe, non-damaging access to a woman’s vagina. In precisely the same way a woman’s clitoris prepares her genitalia to accept and maintain the presence of a penis inside herself, safely. That is, both sexes’ clitorises prepare their genitals for the amazing feat of transferring and accepting gametes without physical injury or infection occurring.

For a female, the clitoris is the guardian of the internal recesses of the vagina, standing sentinel without and within. An actual genital guardian angel. As any woman who has ever had sexual intercourse when not aroused knows, it hurts. You’re rubbed raw. You invariably bleed.

And then comes the urinary infection and, potentially, the sexually transmitted infection. Sex without arousal, without the intimate involvement of the clitoris, leaves a wound (literally) between your legs and an open route to frequent infections, disease and even death.

Yet sexual when aroused is so vastly different. Then there is no pain, no blood and no follow-up infections. Simply smooth, sliding, gliding expansion and bliss; thanks to the queenly clitoris.’

Sexual pleasure and reproduction are two sides of the same coin; these are two biological systems which are designed to work in tandem. Unfortunately, historically, scientists have sat in one camp or the other; this, plus science’s inherent sexism, have contributed to our lack of understanding of the clitoris. 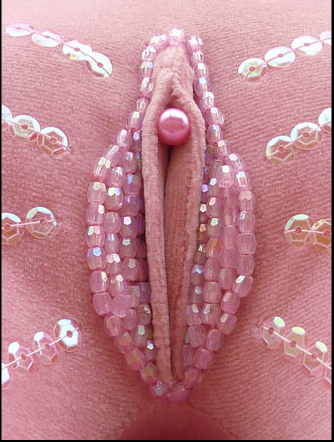 pleasure and reproduction puzzle. Not only does the female clitoris act as a genital guardian angel – enabling safe, sensual sex to occur, clitoral arousal causes the cervix to shift position away from any sperm present in the vagina and prevent them being pulled towards the egg before they are ready for the egg to engulf them and fertilisation to occur.

I’m looking forward to the next piece of research uncovering the female’s active role in reproduction.